Postpartum blues is a mild depression only. It is also known as ‘baby blues,’ or ‘maternity blues.’ This is a frequent concern of new mothers. The condition begins in the first week and it lasts no longer than 2 weeks and is characterized by insomnia, fatigue, irritability, tearfulness, anxiety and unstable mood. Baby blues is self-limiting, meaning to say, after 2 weeks it goes away. However, mothers benefit greatly when the family and health care team are providing empathy and support.

Postpartum depression (PPD) on the other hand occurs during the first 3 weeks to 3 months but it may occur anytime during the first year after giving birth. Primigravidas are more likely to develop PPD. Women experiencing PPD has less interest in her environment, feels the infant is demanding. She also has strong feelings of guilt, unworthiness, shame and frequently expresses a sense of loss of self. Clinical signs and symptoms are generalized fatigue, irritability, anxiety, concentration and decision-making difficulties, appetite changes, sleep disturbances and altered weight. PPD is differentiated from postpartum blues by checking out the symptoms’ number, intenurssity and persistence.

Postpartum psychosis is a rare condition. The clinical manifestations generally surfaces within 1-3 months of delivery. One important risk factor for developing postpartum psychosis is a history of bipolar disorder. Symptoms noted to affected individuals are sleep problems, confusions, irritability, agitation, hallucinations and delusions. What makes this condition dangerous, is the possibility of the mother to kill her baby. Furthermore, poor appetite, feelings of worthlessness and guilt and inordinate concern towards the health of the infant are also manifested by affected mother.

Postpartum depression not only affects the woman negatively but it has an impact on the entire family. Oftentimes, it causes relationship difficulties and causes strains on each family member’s usual coping strategies. To keep depression away, mothers, especially the young ones, should be prepared for the rapid lifestyle changes occurring after birth. During the prenatal period, a discussion about the postpartum period and parenting should be discussed to provide anticipatory guidance about the early weeks at home.

Can we predict whether a woman will develop postpartum depression or not? The answer is uncertain, as childbirth can produce variety of reactions from different women. For those who developed postpartum depression, counseling and antidepressant therapy may be required. This is crucial to keep a mother-infant bonding healthy, keep other children in the family in good condition and maintain optimum health for the whole family in general. 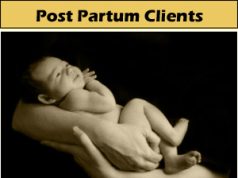