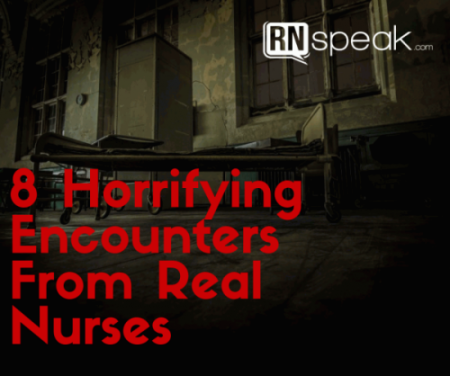 Taking on the duties of a nurse is no walk in the park. Dealing with terminally ill patients and cleaning up other people’s messes might be worth the pay at the end of the day –but you can only do it for so long if you don’t have the dedication. If that’s not hard enough; what happens when nurses are also forced to deal with the supernatural? Here are some eerie encounters from real nurses who might have just had a brush with something more sinister:

This comes from a nurse who used to work in a hospital stroke floor. Dealing first hand with patients is one thing, but it is particularly hard to deal with those that are dying.

There are two things that these stroke patients claim to experience before they die. One of it would be the male duo that will walk in the room all of a sudden and pack their things to leave. Frightened patients usually ring the nurses to tell them that these men are scary, loud and huge. No one seems to have an explanation for this.

The next one is the little boy. This boy is known to appear to dying patients, running around the hallway laughing and going into the rooms trying to wake the patient up. Patients are usually annoyed –asking the hospital who is allowing children to run rampant around.

There has been no explanation for both of these occurrences. Besides the fact that they only happen to patients that are dying or seriously ill, no one knows how patients who don’t know each other seem to share the same story.

Working as an aid in a hospice unit can be somewhat dry. This nurse took it upon her shoulders to play practical jokes on her team mates sometimes. She would go to the room of a patient who had recently died and press the call button. Confused and frightened, the nurses would come to shut it off. Then from her hiding place in the closet, she would jump out and scare them.

All was well, until she learnt the true meaning of fright one night.

She was making her rounds as usual until she heard a scream at the nurses’ station. Rushing to the scene, the both of them witnessed what seemed to be a large shadow rising up from the wall –out of absolutely nothing. She was shocked, but was force to shrug it off as she had to still perform her rounds. During her shift, the confused nurse heard three knocks on the door leading to the patio. There was an older gentleman outside; dressed in black from head to toe. She didn’t have an access card, so she went to get a nurse who did.

When they came back, the man was gone.

A commotion was heard in the other room. A patient had fallen down from his wheelchair, stumbling around in a pool of his own blood. There was not much the nurses could do at this point except lie him down and clean him up. Back in the other room, the nurse also got a distress call from a patient. By the time she arrived, he stopped breathing.

Back in the bloody room, the nurse continues to help the dying patient clean up when she is sent to fetch more linens. She walks down an empty hallway and comes face to face again with the previous gentleman staring at her.

“One more to go. Then I’m done for the night.” He whispered. Then he walked into another patients’ room. The nurse runs after him into the room and looks at the patient. She looks straight at her and takes her last breath.

She pronounces the patient dead and then looks back. In the doorway, another frightened nurse stands still, her face white. “I saw it too,” she whispers.

3. The Whisper At The Nursing Home

This nurse used to work in a nursing home when it all happened. He was in charge mostly with delivering the food to patients and cleaning up after them. One fine day however, he was on his way with his usual rounds when he heard what sounded like a whisper behind him. Shockingly enough –it sounded like the voice of a child, who said his name.

This nurse was scared to say the least, and tried to find comfort with a friend of his at the same home. His friend told him to shrug it off and blamed it on the home’s old piping system. That very same week, they both wait for each other to take turns using the bathroom when a loud bang echoes on the main bathroom door. Running out, they find that there was no one behind the door and that they were the only two workers on the floor to begin with. What’s frightening enough is that they start to hear whispers too at the same time –but the voice says each of their names now. They finished up their duties as fast as they could, but before heading out a deep and loud voice screams.

“Just die already!” The house shook and both of them fall to ground and cover their ears. Not long after that, this nurse’s friend puts in his two-week notice. The other nurse stays on for a while more until the knocks, sounds and voices gets so bad he ends up leaving to. Was this a true encounter with an angry spirit? Or was this powerful entity not human at all?

It’s always joyful for a nurse when a new life is brought to this world. This story however starts off with one nurse –who recounts her friend’s grandmother’s experience during her brother’s delivery. The grandmother, a devout Catholic said that in the nursery room for newborns, she witnessed a random nurse hastily draw blood from her grandchild and drop it into a test tube. She then slid the test tube under the baby’s mattress; but not before getting caught by her grandmother.

Although there was no direct harm to the baby, the grandmother started questioning the nurse’s and doctor’s ethics (the doctor had a pentagram tattooed on his body) and warned her friend who was considering having the same doctor around for her own child’s delivery. This woman didn’t listen however, and continued on to deliver her child under this doctor.

It couldn’t be explained –but this child had a string of incidents happen to her throughout her early life. Nightmares, erratic behavior, memory loss and an overall dark attitude were just some things to name. She even woke up multiple times in different towns –unclear how she got there. There was even one time she drove her car into the woods, and slept in it till the morning for a reason she doesn’t remember. Was this a mere coincidence or something deeper?

Nurses tend to bond with their patients over time –but can that bond surpass even death? This nurse recounts the story of losing a patient that was very close to her at some point. Her name was Debbie, and she was placed in a center for disabled people. This nurse who worked there recounted the many nights when Debbie and her would stay up chatting and getting up to mischief when she couldn’t sleep.

Unfortunately, Debbie passed away from complications a while after. Her room was taken over by a new patient –but that didn’t seem to sit right for long. This nurse recounts her coworkers and her experiencing weird phenomena in the room, such as a voice saying “what are you doing here?” that matched eerily to Debbie’s voice. There was even a time where things in the house would fall over when they were heavy and neatly stacked.

Was this the ghost of Debbie still wreaking mischief?

Ask any nurse and they would tell you that the ICU is not really a fun place to visit. This nurse remembers one story that stuck to her however. It was about an old woman who was put in the ICU for a problem with her leg; who saw something beyond unimaginable.

It started one night when the woman kept claiming to see a woman in the section next to her as this ICU had a window that led into a separate room. She called on nurses each day asking who that woman was; but they all told her that the room was unoccupied. One day, the woman was screamed at the top of the lungs. When asked what she saw, the old woman claimed that there was a woman who had pressed her face against the window and was staring at her. The shocker? This woman had no face, just flesh where her face should have been.

It was later explained that there was a woman –an accident woman who had come in the ICU after a crash had nearly ripped all of her face from her body. Doctors and nurses tried their best to save her, but she died horribly that night.

This experience is short –but definitely creepy. A nurse recounts one of her nights working her shifts, when she catches a glimpse of two people in one of the clinic rooms. It’s after hours and the clinic should be closed, so she calls her colleague who also sees these people. It’s dark, so they call security guards to go and check it out.

When the guards go, no one is there.

They leave, and the nurse once again passes by the area. She sees the shadows moving around again –so she once more calls security. This time the guards split up, and check entrances around the clinic. One guard doesn’t find anything and radios his partner to regroup. His partner walks over to where he is and there it is.

There was someone standing behind his friend as he speaks on the radio. It disappears before he can do anything.

8. The Man In The Corner

This story comes from a nurse who literally quit his night shifts after experiencing this. He worked at a small, privately owned nursing home and was getting some paper work done at the dead of night. He started off hearing random noises at some point and thought it was just patients in the room settling in. All of a sudden, a figure passed by in the corner of his eye and entered Room 3. He alerted his CNA and they both rushed into the room.

Upon getting there, he saw an old patient sitting upright in his bed talking to someone who wasn’t there. When asked what he was doing, he simply exclaimed,

“Oh. I was talking to the man. He’s right there, in the corner.”

Clearly, there was no one in the corner. This nurse was a little freaked out, so he confided in his other friend who was also a nurse there; hoping that they would tell him that it was just the rambles of an old man. Unfortunately, that wasn’t the case. Turns out many patients in the home -with no relationship whatsoever to each other- all claim to have witnessed the man in the corner. To this day, no one really knows what it means or what it’s there for.

Just sometimes, the lines between the normal and supernatural get blurry. Hospitals and nursing homes especially are surrounded in sickness and death, which makes it highly susceptible to such forms of activity. Be this as it may, let’s hope nurses develop nerves of steel in the future –so they can carry out their good deeds in peace!