Anaphylaxis is an alarming emergency situation because of its rapid onset which may lead to death within a short period of time. Despite of its fatalities, death and the irreversible damage it caused, anaphylaxis is not always recognized thus, studies may underestimate the incidence (Soar et al, 2008). Anaphylaxis is not a reportable disease and the true incidence is unknown as concluded by Sheikh and colleagues (2012)—due to perplexity of its diagnosis, treatment and investigation; limited data on fatal anaphylaxis; and non-compliance for outpatient follow-up of its victims. Time trends for anaphylaxis fatalities are not properly presented.

Anaphylactic shock is a severe, life-threatening, generalized or systemic hypersensitivity reaction characterized by rapidly developing critical tribulations on airway / breathing and circulation usually associated with skin and mucosal changes, as defined by the European Academy of Allergology and Clinical Immunology Nomeclature Committee. It is a circulatory shock state resulting from severe allergic reaction producing an overwhelming systemic vasodilatation and hypovolemia (Smeltzer & Bare, 2004).

Death immediately occurs after the contact with the trigger if anaphylaxis is fatal, called anaphylactic shock. From a case-series, fatal food reactions cause respiratory arrest typically after 30-35 min; insect stings cause collapse from shock after 10-15 min; and deaths caused by intravenous medication occur most commonly within 5 min. Death never occurred more than 6 hours after contact with the trigger (Soar et al, 2008).

An allergyis a hypersensitivity to a particular foreign antigen, called an allergen. When the immune system over-reacts to the allergen, it causes hypersensitivity producing tissue damage. The antigen is a chemical marker that identify cells whether “self” or “non-self” (foreign body). Antibodies, also called immune globulins (IgE) or gamma globulins, attached to antigens to “label” them for destruction of foreign body (Scanlon & Sanders, 2007).

During an allergic response, the immune system produce are IgE antibodies, which bond to mast cells. Mast cells release chemicals such as histamine and leukotrienes. These chemicals contribute to the process of inflammation by increasing the permeability of capillaries and venules. Tissue fluid collects and more WBCs are brought to the damaged area. In the case of anaphylactic shock, allergy mediators flooded the body causing severe inflammation (Scanlon & Sanders, 2007; Sheir et al, 2006).

*Skin and mucosal changes often the first feature and present in over 80% of anaphylactic reactions (Soar et al, 2008).

*Not all signs and symptoms are present in every case

B. Presenting signs and symptoms

The diagnosis of anaphylaxis is based largely on history and physical findings. Laboratory procedures have proven to be not always reliable in the diagnosis. Elevated plasma histamine is only reliable within one hour of onset. Serum or plasma tryptase levels greater than 15ng/ml within 12 hours (ideally within 3 hours) of onset is more widely used as a confirmatory test but usually negative in food-induced anaphylaxis. Serial total serum or plasma tryptase measurements are more advisable that single measurement. Proven skin tests to allergens and elevated allergen-specific IgE levels in serum are not a reliable diagnostic of anaphylaxis, moreover these tests provides clinical relevance in the prevention of anaphylaxis (Sheikh et al, 2012). Mast cell tryptase is the laboratory procedure that will confirm a diagnosis of anaphylactic reaction. Medical emergency investigations such as arterial blood gases, ECG, chest x-ray, urea and electrolytes may also be helpful in the treatment (Soar et al, 2008).

Remove the trigger, if possible.

Immediate intervention for anaphylaxis is the removal of the causative agent, although it is not always feasible. Once first sign of reaction occur, immediately stop/discontinue any drug, infusion and/or transfusion suspected of causing the allergic reaction. Remove the stinger after a bee sting. For food-induced anaphylaxis, force vomiting is not recommended because of the possibility of aspiration due to esophageal edema. Do not delay definitive treatment if removing the trigger is not possible (Soar et al, 2008; NHTA, 1990).

Patient should be placed in a comfortable position to promote ventilation and circulation. Patient with airway and breathing problems may assume fowler’s position for maximal breathing (for early stage), unless not contraindicated, e.g. hypovolemia and hypotension (late stage). Lying flat with or without leg elevation or trendelenburg position is helpful for patients with hypotension and other circulatory problems. Patient with anaphylactic shock should not be placed on sitting and never on standing up, as these can deteriorate patient’s condition leading to cardiac arrest. Victims that are breathing and unconscious should be place on their side, recovery position. Pregnant patients should lie on their left side to prevent caval compression (Soar et al, 2008; NHTA, 1990). In the study of Zhao et al (2007), it was concluded that the head-down tilt posture (trendelenburg position) can facilitate venous return from the splanchnic organs and lower extremities and is recommended for the treatment of hypotension in anaphylactic shock.

Assist on Ventilation and Advanced Airway

Due to laryngeal edema and inflammation of the bronchial passages, endotracheal intubation or tracheostomy may be necessary to establish an airway and promote ventilation (Smeltzer & Bare, 2004).

Initiating venous access is a must for fluid resuscitation and administration of medications. Central venous line is also important in monitoring central venous pressure.

Highest concentration of oxygen is immediately administered, preferably using a mask with an oxygen reservoir which gives 60%-100% O2 concentration. Use self-inflating bag for patient with tracheostomy or endotracheal tube (Soar et al, 2008). Anaphylactic shock and the other types of shock are characterized by generalized cellular hypoxia resulted from poor tissue perfusion and decrease oxygen. The severity, irreversible damage and mortality after shock are strongly associated with depleted oxygen level in the brain (Cui et al, 2006).

Large volumes of fluid may leak from the patient’s circulation during anaphylactic reaction because of fluid shift during systemic inflammatory process and increase urinary output resulting to hypovolemia. There will also be vasodilatation. A large volume of fluid may be needed to treat hypovolemia and promote circulation. Fluid resuscitation should be infused immediately. Hartmann’s solution or 0.9% saline are advised for fluid management. Be careful with the use of colloids and crystalloids as this may cause anaphylaxis (Soar et al, 2008).

Adrenaline is widely used as the first-line and main stay treatment of choice for anaphylaxis. It is administered for the purpose of its vasoconstrictive action (Sheikh et al, 2012; Soar et al, 2008; Smeltzer & Bare, 2004; NHTA, 1990).

Bronchodilators can be given to reverse histamine-induced bronchospasm. Aminophylline per IV can be given for severe cases. Nebulization is administered using albuterol, salbutamol and ipratropium. Although intravenous magnesium is a vasodilator, contraindicated in anaphylactic shock since it can cause hot flushes and make hypotension worse (Soar et al, 2008; Smeltzer & Bare, 2004).

Vasopressors and inotropes (noradrenaline, vasopressin, metarminol and glucagon) are used when initial resuscitation with adrenaline and fluids are not effective. Glucagon is given for patients who are taking beta-blockers. For patients who develop severe bradycardia after an anaphylactic reaction, atropine IV can treat this condition (Soar et al, 2008) 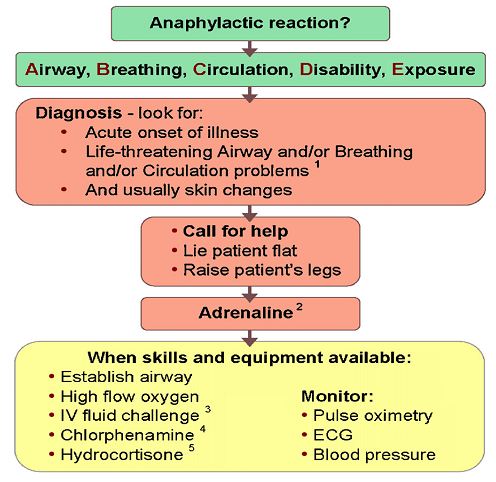 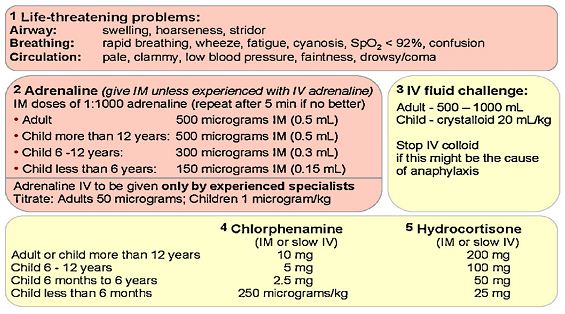 The most distressing complication of anaphylactic shock is the disability and the irreversible damage following poor brain tissue perfusion. Respiratory complications may occur, and patient may have tracheostomy or much worst with the support of mechanical ventilator. Physical disability is possible, and physical rehabilitation is a must. Autoimmune disorders following prolonged medications and renal complications may occur after severe hypovolemia and anaphylactic shock.

Statistics shows that anaphylaxis mortality rate is low and stable, despite the increasing prevalence—but, its irreversible damage and the life-long disability which can occur after anaphylactic shock can never be ignored. The emergency state of anaphylactic shock remains to be an alarming truth of disability causing financial, physical and emotional burden. The reaction occurs without any warning and can be a frightening experience for those at risk and for their families.

The most important requirements in the treatment of anaphylactic shock are early detection, early diagnosis and immediate interventions without any delay of each procedure. The aim of resuscitation is to restore and maintain the vital organ perfusion and prevent complications of irreversible damage. Thus, the patient and family should be aware of the condition and knowledgeable on immediate first aid measures before the patient reach health care facilities. Health care providers such as physicians, nurses and other anxillary health team should be knowledgeable enough with proper training and expertise in handling emergency situations like anaphylactic shock. They should base their decisions on both clinical situation and comprehensive advance knowledge on the pharmacologic background and the rationale of every intervention.

“Time counts to save the patient on the impending doom of anaphylactic shock.”