Chronic suppurative otitis media (CSOM) is caused by recurrent ear infections resulting to tympanic membrane perforation characterized by persistent foul smelling otorrhea from the middle ear. Misconception on ear infection as related to poor hygiene and embarrassing foul smelling ear discharges, generates an erroneous notion of social stigma—which is one of the major causes of hearing loss in CSOM, since most of the cases are not reported and not diagnose earlier without immediate and appropriate treatment. Hearing loss is preventable, if only immediate treatment is taken (Smeltzer & Bare, 2004; Acuin, 2004; Bonin et al., 2003).

In the report of Acuin (2004), prevalence surveys confirmed that the global burden of illness from CSOM affects 65–330 million individuals with draining ears, 60% of whom (39–200 million) suffer from significant hearing impairment. CSOM accounts for 28, 000 deaths and a disease burden of over 2 million DALYs. Over 90% of the burden is borne by countries in the South-east Asia and Western Pacific regions, Africa and several ethnic minorities in the Pacific rim. Mastoidectomy with or without tympanoplasty eradicates mastoid infection in about 80% of patients and may be combined with surgical drainage of otogenic abscesses. However, such treatment is costly and does not always lead to satisfactory hearing improvement, and is inaccessible in many developing countries.

Smeltzer & Bare (2004), defines chronic suppurative otitis media as the result of repeated episodes of acute otitis media causing irreversible tissue pathology and persistent perforation of the tympanic membrane. Chronic infections of the middle ear damage the tympanic membrane, destroy the ossicles and involve the mastoid (Smeltzer & Bare, 2004, Acuin, 2004). CSOM may develop in elderly people who have had an asymptomatic or exacerbated chronic ear infection after URI or when water enters the middle ear during bathing or swimming. Chronic suppurative otitis media may be a complication of a retracted or perforated tympanic membrane. In elderly patients with otorrhea, squamous and basal cell carcinomas should be considered (Acuin, 2004). Tympanic membrane perforation may be permanent, and the middle ear mucosa may become hypertrophic. In some patients, the inflamed, polypoid hypertrophic mucosa protrudes through the perforation into the external auditory canal as an aural polyp. A cholesteatoma may be present. Some cases are complicated by abscess formation or erosion into bone (Smeltzer & Bare, 2004).

The ear has external, middle and inner ear sections and provides the senses of hearing and equilibrium.

The external ear consists of the auricle which collects the sound which then travels down the external auditory meatus.

The auditory (eustachian) tube connects the middle ear to the throat to help maintain equal air pressure on both sides of the eardrum.

The inner ear is made up of a membranouslabyrinth inside an osseous labyrinth. Between the two labyrinths is a fluid called perilymph. Endolymph is inside the membranous labyrinth. The cochlea houses the organ of hearing while semicircular canals function in equilibrium. Within the cochlea, the oval window leads to the upper compartment, called the scala vestibuli. A lower compartment, the scala tympani, leads to the round window. The cochlear duct lies between these two compartments and is separated from the scala vestibule by the vestibular membrane, and from the scala tympani by the basilar membrane. The organ of Corti, with its receptors called hair cells, lies on the basilar membrane. Hair cells possess hairs that extend into the endolymph of the cochlear duct. Above the hair cells lies the tectorial membrane, which touches the tips of the stereocilia. Vibrations in the fluid of the inner ear cause the hair cells to bend resulting in an influx of calcium ions. This causes the release of a neurotransmitter from vesicles which stimulate the ends of nearby sensory neurons.

Nerve fibers carry impulses to the auditory cortices of the temporal lobes where they are interpreted. 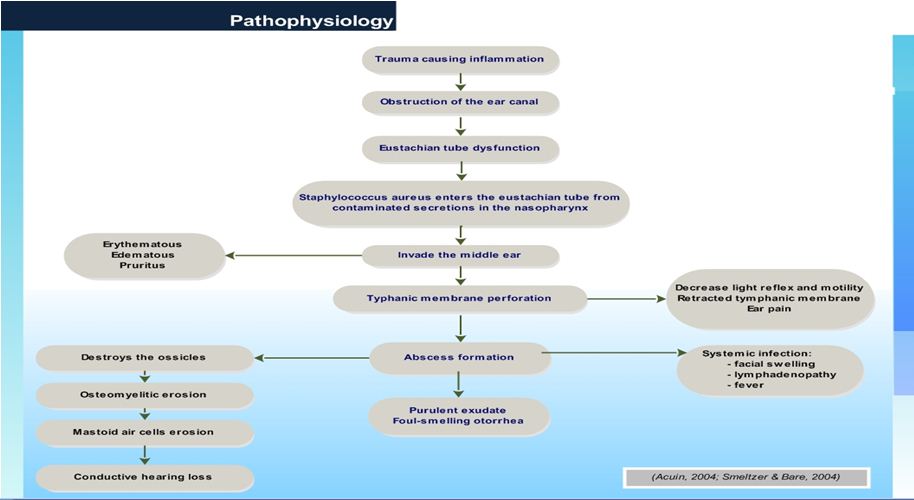 Culture and Sensitivity Testing of discharge reveals the presence of staphylococcus aureus – one of the most common bacterial pathogens of otitis media (Smeltzer & Bare, 2004).

Staphylococcus aureus is a respiratory pathogen that may have been insufflated from the nasopharynx into the middle ear through the Eustachian tube during bouts of upper respiratory infections. The bacteria is infrequently found in the skin of the external canal, but may proliferate in the presence of trauma, inflammation, lacerations or high humidity which may then gain entry to the middle ear through a chronic perforation (Acuin, 2004).

CT Scan revealed perforation of the tympanic membrane, ossicular abscess and erosions of the bony partitions of the mastoid air cells. Absence or presence of cholesteatoma. Labyrinth and temporal bones may be intact or damaged.

The staphylococcus areus has infected and eroded the tympanic membrane causing perforation, ossicles and the mastoid bony partitions which may cause a conductive hearing loss. CSOM can cause chronic mastoiditis and lead to cholesteatoma formation. It can occur in the middle ear, mastoid cavity, or both. If untreated, cholesteatoma will continue to enlarge, possibly causing damage to the facial nerve and horizontal canal and destruction of other surrounding structures. Absence of cholesteatoma is a good indication that the condition is not malignant and not cancerous. Intactness of labyrinth and temporal bones are signs that there will be no sensori-neural defect (Smeltzer & Bare, 2004; Acuin, 2004).

The two major problems of chronic suppurative otitis media are infection and pain (particularly, in the presence of mastoiditis). In case of fever, infection is the underlying cause of fever—if infection is treated, then fever will disappear.

-Patient and significant other’s knowledge about the disease, treatment and prevention.

– Initiating self care and continuing care at home

An antibiotic of Aminopenicillin type that inhibits cell- wall synthesis during bacterial multiplication. Kills susceptible bacteria. Indication and dosage: for severe infections of the ear – 500 mg/capsule  1 capsule every 8 hrs. for 7 days.

The analgesic effect of NSAIDs may result from interference with the prostaglandins involved in pain. Prostaglandins appear to sensitize pain receptors to mechanical stimulation or to other chemical mediators. NSAIDs inhibit synthesis of prostaglandins peripherally and possibly centrally. Like salicylates, NSAIDs exert an anti-inflammatory effect that may result in part from inhibition of prostaglandin synthesis and release during inflammation. Indication and dosage: mild to moderate pain, inflammation, stiffness, swelling or tenderness caused by trauma or inflammatory process and surgical procedures – Mefenamic Acid 500mg/tablet  1 tablet every 8 hrs. PRN (if there is pain only) on full stomach.

Careful suctioning can be done on the affected ear under microscopic guidance performed by an experienced physician. Proper aural toilet habit and ear care. Instillation of antibiotic drops is used to treat purulent discharges. Also, systemic antibiotics may be prescribed as indicated (Smeltzer & Bare, 2004).

Surgical procedures include tympanoplasty, ossiculoplasty and mastoidectomy. Extent of damage and infection determines the type of procedure/s to be performed. Tympanoplasty is the surgical reconstruction of the tympanic membrane which requires ossicles reconstruction. This procedure restores middle ear function, close the perforation, prevent recurrent infection and improve hearing. Ossiculoplasty, surgical reconstruction of the middle ear bones to restore hearing by re-establishing the sound conduction mechanism. Mastoidectomy is done to remove the cholesteatoma, gain access to diseased structures, and create a dry and healthy ear (Smeltzer & Bare, 2004; Goldman, 1996).

Preventing injury from vertigo. Vertigo occurs if the semicircular canals or other areas of the inner ear are traumatized during the mastoid surgery (Smeltzer & Bare, 2004).

Preventing altered sensory perception. Facial nerve (cranial nerve VII) injury is potential but rare complication of mastoid surgery. Chorda tympani nerve disturbance may occur resulting to alteration in taste and dry mouth on the side of the surgery but soon will disappear until the nerve regenerates (Smeltzer & Bare, 2004).

Medications : Pain-reliever, anti-pyretic and antibiotic medications as prescribed, with proper instructions on intake, administration and compliance.

Environmental : Avoidance of noise-pollution and other hearing hazards. Provide sounds soothing to ears.

Treatment : Proper aural toilet habit and aseptic daily post-op wound care with proper instructions on how to perform the procedures.

Health Teaching : Improving hearing and communication techniques. Health promotion and prevention on the possible recurrence and occurrence of complications.

Out-patient : Follow up consultation after 1 week, as indicated, and or as advised. Importance of compliance to continuous care at home.

Diet : Dietary management of foods rich in protein, iron, vitamin C and zinc. Avoid foods rich in sodium and cholesterol as it may impairs tissue healing; sugar control for diabetic clients. Emphasize importance of diet for rehabilitation and fast recovery.

Health promotion and prevention are the functions of the primary health care system. Mass awareness and education about CSOM can avert social stigma thus, promoting acceptance. This will play a vital role for screening and early detection. A history of at least 2 weeks of persistent ear discharge should alert primary health workers to the problem. Hearing loss can be prevented if people will listen and learn the ways on how it can be avoided.

CSOM may lead to hearing loss or deafness. The antibiotics and surgeries are very expensive. Its effects are not only centered on the social stigma moreover, its burden is on the permanent damage of deafness. But it can be prevented, early detection and management will save thousands of patients from deafness. Early management will save you from expensive cost of medications, surgery and hospitalization.