Breast cancer is a malignant tumor that has developed from cells in the breast.Its usually begins with a formation of a small, confined tumor (lump), or as calcium deposits (microcalcifications) and then spreads through channels to the lymph nodes or through the blood stream to other organs. The tumor may also grow and invade tissue around the breast, such as the skin or chest wall. Different types of breast cancer grow and spread at different rates, some take years to spread beyond the breast while other move quickly.

About 39,510 women will die from breast cancer in the U.S. according to American Cancer Society’s most recent estimates as of 2012 . Death rates have been decreasing since 1990 ,especially in women under 50.These decreases are thought to be the result of treatment advances, earlier detection through screening, and increased awareness.

Hormone Replacement Therapy– Taking estrogen supplements for menopause for lengthy period of times are at some increased risk for development of breast malignancies. While the addition of estrogen and progesterone as a hormone supplement may decrease the occurrence of endometrial cancer, it does not appear to decrease the risk of breast cancer.

Radiation Exposure-A Woman who has been exposed to ionizing radiation between puberty and tthirtyyears of age has twice the risk of developing malignant breast cells, than an individual that is not exposed to radiation or exposed at later time in life.

BRCA-1 or BRCA-2 genetic mutation– found risk of developing breast cancer.These genes normally produce proteins that protect from cancer. If a parent passes a defective gene, Women have 85% chance of getting breast cancer sometime during their life.

Alcohol Intake-Alcohol intake also has not been conclusively shown to increase a woman risk of breast cancer. Although studies show a slight increase in women who consume one drink a day and a greater increase among woman averaging three drinks daily.

The patient most often reports that she detected a painless lump or mass in her breast of that she noticed a thickening of breast tissue. Otherwise the disease most appears on a mammogram before a lesion becomes palpable.The patients health history may indicate several significant risk factors for breast cancer.

Inspection of the patient’s breast may reveal

Surgery
Breast-conserving surgery, an operation to remove the cancer but not the breast itself, includes the following:

Chemotherapy
Chemotherapy is a cancer treatment that uses drugs to stop the growth of cancer cells, either by killing the cells or by stopping them from dividing. When chemotherapy is taken by mouth or injected into a vein or muscle, the drugs enter the bloodstream and can reach cancer cells throughout the body. The way the chemotherapy is given depends on the type and stage of the cancer being treated

Trastuzumab (Herceptin) is one example of a targeted treatment designed for women whose tumor cells are HER2-positive. Since trastuzumab was approved, women with HER2-positive tumors are living significantly longer.

Hormone Blockers
These treatments prevent estrogen from attaching to receptors on breast cancer cells. As a result, estrogen cannot get in the cells, and tumor growth is slowed. The treatments also reduce the amount of hormones circulating in the body that attach to estrogen or progesterone receptors. By blocking hormones, the treatments deprive tumor cells of the substances they need to grow. 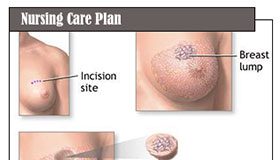